The preparation of carbon dioxide gas is needed before it is actually stored in cylinders.

The preparation of carbon dioxide gas is done though following steps :

1. From fermentation in the brewing of beer

2. By-product of manufacture of hydrogen in petroleum refining

3. Combustion of other fuels

4. By heating magnesium and calcium carbonate in the presence of their oxides. 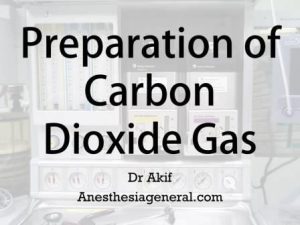 It is stored in gray cylinders at 50 bar. Solid CO2 is stored and transported in insulated containers. The filling ratio in cylinders is 0.75 in temperate climates and 0.67 in tropical regions. The liquid phase disappears when 83% of gas is exhausted.

Normally it is produced in the body during tissue and food metabolism. The inspired atmospheric air contains 0.04 per cent of carbon dioxide. Carbon dioxide has marked effects on the CNS, the respiration and circulation.

Oxygen-CO2 premixed cylinders are available, after the final preparation of carbon dioxide gas . These are black with white/white shoulder and filled to a pressure of 137 atmospheres.

(i) Carbon dioxide is marketed in steel cylinders painted grey, usually in a liquid form, under a pressure of 58 to 72 atmospheres.

Combinations of oxygen and 5-10% carbon dioxide are marketed as ‘carbogen’.