In pediatric patients for short surgical procedures or for putting intravenous catheters before IV induction ketamine has shown effective for producing sedation.

It is highly effective with a wide margin of safety, and uniquely preserves protective airway reflexes and also does not require intravenous access, therefore can be used safely in emergency setup. 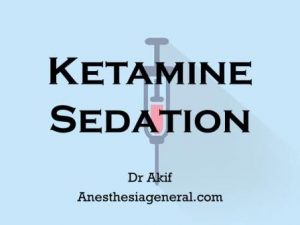 Combining with midazolam the effectiveness increases and sometimes suffices for even short surgical procedures avoiding addition of other drugs.

Although midazolam use with ketamine is commonly used now a days. However, other studies denied the role of midazolam in reduction of emergence phenomenon when added to for Ketamine sedation .

Other than intramuscular or intravenous routes, ketamine can also be administered through rectal approach for premedication, although the required dose is higher (10 mg/kg). It is also tried through oral or intranasal route for sedation and premedication.